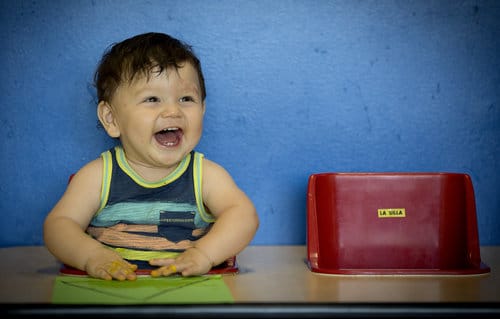 At Rayito de Sol, we embrace bilingual education. From our classroom curriculum to physical activities, we are always incorporating Spanish into the lives of our students. There are many benefits to exposing children and babies to a second language. During infancy, the child’s brain is a learning machine. What better time than now to expose them to a second language and give the the excellent benefits of language immersion!

“Children who become bilingual learn how to prioritize information, as their brains have to figure out how to handle two sets of words for everything. All that mental juggling, as one speaker called it, appears to be a good thing for the brain.

But what intrigued me most was research presented by Janet Werker, a psychologist at the University of British Columbia. She studies babies who grow up in bilingual households and has found that these babies demonstrate certain language abilities at birth that babies exposed to just one language don’t. For example, a newborn from a monolingual household will show a preference for listening to its native language only. But a baby born into a bilingual home shows equal interest in both languages it has been exposed to in the womb.

In Werker’s experiments, all babies, monolingual and bilingual, can discriminate between speakers of different language classes at four and six months old, but the monolingual infants lost this ability by eight months of age. The bilingual babies, however, are even more special. In one experiment, Werker exposed eight-month-old babies who grew up in households speaking Spanish, Catalan, or Spanish and Catalan (i.e., bilingual) to videos of women speaking English or French. The bilingual babies, but not the monolingual ones, were able to tell the difference between the two unfamiliar languages.” Sarah Zielinski – Smithsonian

Find out more on Rayito de Sol’s Spanish Immersion Program by scheduling a tour at our location in Minneapolis or Richfield today! Our new Chicago location will be opening soon.