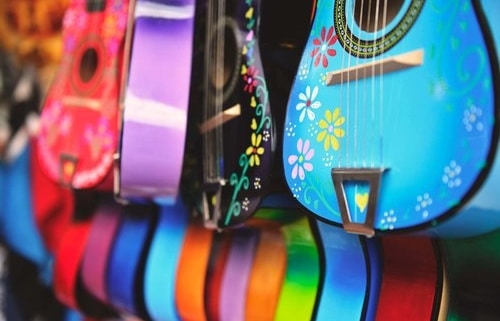 Music is all around us every day! We hear it on the radio in the car, on the television at home, out on the street, and while out doing activities with family and friends! At Rayito de Sol, we incorporate music into activities every day to help our children learn Spanish in a fun and easy way!

Children can learn to sing before they speak

Even before children start talking proper sentences, most will be able to sing a song or part of it. Our brains seem to remember language easier when the words are used with music.

Before each of my children even could speak sentences, they could sing “Twinkle Twinkle Little Star” in English word for word because it was one of the songs I sang to them before bed every night.

Lyrics teach all types of vocabulary

Different songs can be used to teach your child specific vocabulary. When teaching English to children I always started a class with a good round of singing:

Most of the songs translate into many languages so by playing them and singing to your child they can easily pick them up. For bilingual or multilingual children who know the song in one language, it will be easier for them to understand the meaning of the song when they hear it in another.

Rhyming helps to learn similar words and prepare for reading

Most children’s songs are simple and have rhyming words which are easy for kids to remember. Learning to rhyme is an important skill to have when starting to read in any language. We like to sometimes make up our own songs using words that rhyme.

Songs that include movement such as “If your happy and you know it” and “Heads, shoulders, knees and toes”, reinforce the lyrics of the song. By pointing at things you are saying, or performing the actions that are sang, children will learn to associate the words they are saying to the movements they are making.

Children don’t realise they are learning

Even when children don’t know the words to the songs, music can play such an important role in the learning process as they don’t actually realise they are learning. When I put music on at home, my kids immediately start to dance and try to sing along. Posted by Chontelle Bonfiglio – Bilingualkidspot on October 3, 2016

Why 51% of CEOs are Bilingual.